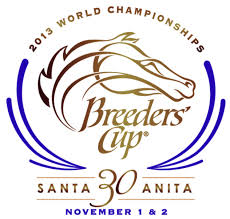 Breeders Cup – The best Horses on the best day

Saturday of the Breeders Cup is one of the most compelling days racing of the whole year. You may not know a lot of the American horses but trust me these are the very best athletes for their racing conditions in the world. With the exception of the turf races, where European horses tend to dominate, even on their Chester Racecourse type track, the dirt horses you see are honed through breeding, training, nutrition and tactics to be the very best of their species ad any time you witness the echelon of a culture its always exciting.

Here is a quick guide as to what to look for in the feature races.

7.05 Breeders Cup Juvenile Fillies – She’s a Tiger has an amazing attitude and loves to force the pace – does she really stays this trip and can Gary Stevens get he fractions right – he went too early on her when she was run down by Secret Compass and I don’t think Gary will do that again. Artemis Agrotera looks like an improving progressive horse with  kick and will stay. Rosalind was second to a very good horse and covered  lot more ground so we need to upgrade that performance and Sweet Reason was overcome by Artemis which suggests she may be second string. It’s an exciting race of gifted fillies. We will make our decision tomorrow.

7.43 In the fillies and Mares Turf this looks like a great opportunity for Dank from Sir Michael Stoute’s Yard and I only see the draw of 1 and Ryan Moore getting trapped on the fence and perhaps Andre Fabres Romantica, if on a going day as the main dangers. Of the Americans Marketing Mix brings a good speed figure to the party.

At 9.43 the Boys Juvenile is equally as exciting as the Girls. Havana is the short favourite with some amazing Speed Ratings but  question the trip and a not sure he truly stays. Perhaps he looks tired at the end of his races as he has gone so quickly. If he does stay then they wont beat him. Looking over his shoulder I the tough and impressive BondHolder but the signals from Doug O’Neils barn are not good. We Miss Artie looks progressive and improving at the right time of year and is tough, Tap it Rich won on debut and who knows what his improvement will be in race two. Its a big ask for one so inexperienced. Strong Mandate would have been very short but for a 10 length beating by Havana and if D Wayne Lukas can work out what happened there then he might be in the reckoning. A star will emerge form this race.

10.22 Breeders Cup Turf – Fascinating between The Fugue and John Gosden returning to his old stamping ground and Point of Entry. Throw in Magician, off for a long time but loved the tight turns of Chester, Little Mike, Indy Point, a Southern Hemisphere Grp1 Derby winner from Argentina and you have a quality field. I still think its a two horse race and the way The Fugue travels on this ground if William Buick has the luck in running he will win. If not Point of Entry wins. 11.40 Breeders Cup Mile – Turf. Wise Dan – Horse of the Year, runs here. Is he over the top with a second last time out or was I just the artificial surface that beat him. Back on grass he is immense. Olympic Glory for the Hannons, who have a woeful Breeders Cup record line up against him and if he reproduced his Champions Day run he would win but that efforts of that race and shipping to America must be a concern. Hughes says e feel great. if he does he’s a real contender as he is tough. Za Apoproval will be thereabouts, as always but things have to go wrong for the principals for him to win and so for the rest. Another great Race.

I will write more on this in its own piece but here are the key players. Game on Dude, Mucho Macho Man, Declaration of War, Palace Malice and last years winner Fort Larned. I am looking forward to writing about it let alone the race.

I hope this gets your pulse racing as just a taster and it all kicks off tonight.

All races are being streamed live on BET 365 and we will be putting up their prices n our special Breeders Cup pages.