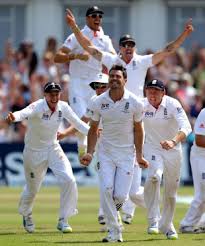 I expect Mike Hunt to have prepared a pitch that is full of bounce and grass and in theory that should suit our four man attack. That is assuming Jimmy Anderson isn’t banned for 4 games for his alleged dispute with Jadeja on day two of the first test. Simon Kerrigan has been called up but this is not a series he should play in. Firstly the pitches will be wrong for his spin bowling and secondly he doesn’t need to be rebuilding his career against the best players of spin in the world. Save it for next year against the West Indies who cant play spin. Good to have him around the scene but leave him for now.

So if I am right that leaves our pace men and Moen Ali to take on a batting line-up that isn’t the power it was but is still very strong against a quick and determined bowling line-up who fought hard at Trent Bridge and will get more assistance at Lords. For England to win they have to bowl first and blow the top order away with pace in session 1 on day 1 and that will be tough but it could happen. Then they have to do the most difficult part, make 500 with a group of batters who cant buy a run at the top of the order but they can bat. Maybe this time?

My problem with that is the Indian bowlers can move it off the straight and we don’t seem to be able to play a swinging ball at the moment, which will be aided by the Lords slope. Either way this pitch will get better and better and for that reason the layers make the draw favourite and that seems perfectly logical. The thing about test cricket is that whilst it might well happen, we can see all three results become very short priced favourites in the first two days and that’s good for betting.

So here’s how we are going to play it before the match.

We will advise more bets as the days move on. I think this test will be a belter.