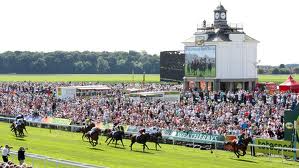 Ok, Ok, we got a caning yesterday from the bookies. Sadly that’s how it goes sometimes at this meeting. However its not what happens it’s how you take it that counts and we have picked ourselves up and are ready to do battle again today.

Good two year olds line up in a variation of the Sales races that take place across the country. Four favourites have won the last ten runnings of this race and favourites generally have a good record of performance, favoured as they are, by the level weights with penalties framing the contest rather than on sales prices achieved. It will be difficult for the unexposed runners Sawaahel and Valley of Fire, both of whom have fancy entries, including Middle Park aspirations. They may be talented but at 22/1 there is little confidence behind Sawaahel but Valley of Fire seems to have attracted a bit of money at 8/1. Its hard to get away form the performances of Kool Kompany who should be better on this quicker surface than he was in Ireland when finishing second in a group race and Fast Act who followed up a good performance behind Tiggy Wiggy with a great run finishing second in Group race at Goodwood. We applaud connections for going head to head in this race. Whilst the programme says 10 run its a 3 horse race as far as we re concerned and those three are good-uns. They are Tiggy Wiggy who as explosive in the Super Sprint and destroyed a goodish field and is definitely a group Horse. Then we get to Anthem Alexnder who put her in her place at Royal Ascot in the Queen Mary, which as thrown up winner after winner and finally Cursory Glance who won the Albany at Royal Ascot. Applying collateral form to horses is always a little dangerous to be too literal but our reasoning is as follows. Anthem Alexander wins because she beat Tiggy Wiggy and will improve again. Cursory Glance will be behind both of them because Patience Aleaxander finished too close to here in the Albany for that to be as good form. There- its that simple isnt it?

Notoriously difficult when you have possible group horses in handicaps and at this level thats what we are looking at. We have nailed it down to four. Short Squeeze who has always been thought of as a group horse in the making and has had three runs in 2014 to get himself right, the last being over 7f. He steps up to his right trip today and could be perfectly primed. Bronze Angel who loves this track and the ground and was a bit unlucky at Goodwood last time. Red Avenger, who triumphed in the same race at Goodwood and Russian Realm who may also be lurking at the bottom of this handicap waiting to explode. We wont talk about this for long as Taghrooda is simply too good for this lot. I would expect Tapestry to push her but not enough to warrant a bet.

My advice is take the inflated introductory prices on offer at Betfair for new customers, if you don’t have an account and have your maximum that they allow. Its free money.

The four to concentrate on are Waila who is dropping back in trip and if and its a big if, she is fast enough to lay up with these on this quick surface, could find the course to her liking. Noble Protector comes in the reckoning on her surprise win in a listed race last time out – although that’s what concerns me, it was a surprise. Momentus for David Simcock who finished 3rd in a listed race on her second run and then was considered good enough to run in the Oaks, where she was put in her place by Taghrooda – no shame there, and then easily won her Maiden last time out. Quiz Mistress who has had a busy year in good races and is highly thought of. Interestingly all the money is for Dermot Welds Starlet but as I have never got him right in 10 years I am not going to try now and with just a Maiden victory to her name those who think they know are getting stuck in.

Another tough one to finish on and it may pay to look at Azagal who was unlucky the way the race panned out recently and if things go her way could easily win a race of this type. The Gold Cheongsam who ran a good comeback race and then had a go at  a Grp3  and travelled well for a long way. Dutch Courage who has been highly tried and looks like things good drop right in a big handicap one day and finally Enraptured who seems to be a John Gosden lurker, possibly even targeted at this race some time ago.