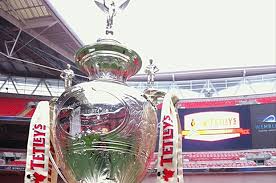 The Challenge Cup Final – Abide with us and win

The knockout feature of the year comes to a head at Wembley and it should be a cracker.

The DNA of Tigers coach Daryl Powell has changed since last year, some would say evolved. He began his takeover from Ian Millward by insisting that his squad needed to “get a buzz” out of defending and grow stronger every time they denied their opposition the opportunity to score. They became quicker and stronger and made teams play in an “uncomfortable way”. As  they got better at this aspect he has encouraged them to play and now their 3/4 line is as exciting as any. Both coach and team have surprised everyone. Tactically they are very good, they play disciplined Rugby and they play as a team who are efficient at both moving the ball and defending against it. They need to be!

The Tigers are playing against the most ruthlessly efficient team of the last decade, possibly ever. They have won more titles than any other in Super League history. They started the “joys of defence” and then through Maguire, Sinfield and Burrows they have terrorised slow moving defences. Add in the strength and speed of Watkins and Hall and sit behind them the incredibly talented Hardacre and you have the reasons why they just keep winning. With one glaring omission – this crop haven’t won a challenge cup, something they are desperate to put right. It’s possible its now or never and with an ageing side, there might be a reason for that record, which could have to do with their talisman, former Army hero, coach Brian McDermott who has always considered that winning the league was his priority. Add in to that, amazingly, during the last 6 season, not this one, Leeds have endured shocking mid season injuries when the key knock out games were being played in the Challenge Cup and you might go some way to understanding why Super Leagues most gifted haven’t lifted the Challenge Cup. This year, fewer injuries and et walla, they are in the final.

So how does it transpire tomorrow? Here is my theory.

For most of the game the Tigers forwards are going to be able to push the Leeds offence out wide and that the key part of this game will be played on the wings. Leeds won’t want a forward battle, their forwards, as good as they have been, are ageing. Peacock and company have been to war a lot of times and there are a lot less miles on the clock of the Cas forwards. My biggest concern is the health of Tiger forward, Craig Huby. He has been an immense ball carrier and tackler this year and the Tigers go where he goes. Problem is he dislocated his elbow 2 weeks ago and it required an operation to get it back in to place (ouch). Surely that can’t have recovered in time. The Tigers know how important he is and the declaration that he will play to the Wheldon Rd faithful as the bus left town yesterday for Wembley was a real boost.However there simply has to be doubts. It’s still a good thing for him to play as his fellow team mates get a real psychological boost from him being out there and if he has to come off at some stage then they are no worse off than if he hadn’t played.

The fate of the Tigers now rests with the ability of the Centres to deny the Leeds play makers time to create opportunities for their lethal backs and in turn their opposite numbers to contain them whilst still playing their own game. Sounds tough! It is, but its that effort that wins Titles and Cups and that’s what the Tigers have to do if they want to win.

Can they do it? I’m  not sure, one thing I am sure of is that they will be no pushover for Leeds and whilst the 4/9 on offer for Leeds to win is tempting I prefer to think that Castleford simply wont be beaten easily and that the 8 points on offer in the handicap market is too generous. It promises to be a cracker and the best way to enjoy it is with a good, winning bet.