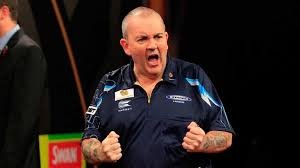 Its been every bit as magical as we hoped when the tournament started and we are blessed with two outstanding semi-finals. Both different and both as equally intriguing as each other. For those of you who took our early advice and backed Gary Anderson at 13/2 e/w, we are just one match away from a collect but ohh what a match and its no easier for our other pre-,match bet of 4 units e/w on Phil Taylor @ 2/1. Can Gary fulfil his amazing potential this time?

This match represents the new breed. The explosive scoring power of two guys who have the ability to throw more 180’s in tournaments than any others. They can also miss a lot of doubles. However both have been working on the same thing this year. How to be better on doubles and because of that, up until now, there scoring this year has been less.

Both players are winning just as much and some could argue that coming in this tournament Gary was in a much better place than Michael. They are also winning without the pain but neither appear to be quite the same players as they were, that is up until now. To win this match one of them is going to have to retain his new found doubles ability but rekindle that unbelievable talent of hitting the lipstick, time after time. I think one of them will. MVG – the force of old or a scared victim?

I think the winner will need to average 104 and probably check out at about 45%. Who is best placed to do that? The answer is both. That’s why our strategy is going to be. Back Gary at 7/4 and then when he gets a lead and they turn it around back MVG in running at odds against. It will happen.

We then hope for Gary to win so we can cop with our initial bet pre-tournament at 13/2. But that’s another matter. On another note the winner of the tournament is in this semi-final, problem is – which one is it?

Our other saver is 4 units to win the tournament on MVG @ 13/8/ We will then at least have one of ours in at much bigger prices than they will be in the final.

So our strategy for tonight  is 4 units Gary Anderson @ 7/4 back to lay then 4 units MVG at evens when that happens. Phil – The War Horse – Taylor. One too many or not?

The old guard do battle in a match that I don’t expect to have the fireworks of the first and nor do I expect it to have the mistakes of the first. Phil is not the player he was but he is getting the job done, in what was without doubt the easiest side of the draw. We always knew that which is why he was such a good bet (advised at 2-1) to reach the final. But before we go collecting on that bet consider this. Phil has scraped past some ordinary players. Kim Huybrechts isn’t ordinary but he should have won and Vincent Van Der Voort simply doesn’t have the belief to get over the line. He should have won as well. That’s two matches that Phil has got through on will power alone. He simply isn’t the same darter he was. No reason he should be either and all credit to him, he is still there and still making semi’s.

So here is the conundrum. RVB has played the Power 62 times and only beaten him 12 times for a 25% strike rate. Barney has been through mental hell but seems to be coming out of it. Can he trick himself into believing that he can now beat Phil. Can he convince himself that Phil isn’t the player he was and that he is back to his brilliant best. Last night he showed that his game is getting stronger and that he seems in a good place mentally. If he can play the board and not the man then he can triumph. IF, IF, IF. There will be a turning point in tihs mtach, you just need to watch for it.

Again our strategy is similar

Back Barney @ 3/1 for 4 units and then look to lay him by backing Phil for 4 units at evens when that happens and lock in a potential no loss profit.

Lets have a double as well  2 units Anderson and Barneveld @ 3/1 & 7/4 That pays 8/1 and that is very possible. all with Sportingbet