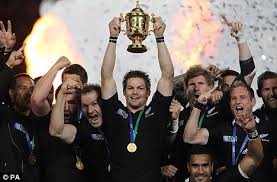 Its time to to look at just whose hands are going to be on the Webb Ellis Trophy. The most sought after cup in Rugby. This promises to be six outstanding weeks of Rugby football and its right here on our doorstep. There are no easy games anymore and the days of New Zealand putting over 100 points past Japan are well gone. Teams are so much better organised and whilst the minnows haven’t got the class of the top 10 they lack nothing in both fitness and desire to succeed and they will create some uncomfortable moments for the favourites.

Clearly the top tier of World Rugby features Australia, New Zealand, South Africa, England, France, Wales and Ireland but just below them Italy, Argentina, Scotland, Samoa and Fiji, are more than capable of beating any of those top teams if they have a slightly off day and at some stage in this tournament they will. There is no doubting that Pool A with England, Wales, Australia, Fiji and Uruguay is this tournaments “Group of Death” and with only 2 teams qualifying for the Quarter finals you simply cant afford a mistake or you will not qualify and sadly one of the top three will not make it through, so who is it going to be. I think England will qualify top. They seem to have the edge over both Wales and Australia in recent matches and Stuart Lancaster’s team whilst feeling the weight of expectation have home games and as we know from Olympic medal tallies that makes a huge difference. A good performance against Fiji in the opener and they will be on their way.  So now it boils down to Wales or Australia for the other qualifying place and again for reasons of another home tie I can’t go against Wales who I think will perform a lot better than bookies think currently.

Pool B sets a different task with South Africa certain to qualify top and then a gaggle of others fighting for the other place. Scotland started to show more at the back end of the Six nations and they might be underestimated by a few but they will need to be at their best to beat Samoa and that’s no given. Japan and the USA will both be physical but I don’t see them causing an upset. It could simply go down to who wins between Scotland and Samoa and with that game at St James’s Park late in the pool fixtures it will be interesting to see how Scotland approach the game against South Africa the week before. They may rest a few to make sure they are at full strength to beat Samoa. I think the strength of Samoa, if they can hold their discipline, could cause an upset in this one but I am concerned at their lack of preparation so reservedly I will go for Scotland to take the final place.

New Zealand are everyone’s favourite for this event and rightly so. Pool C is at their mercy and whilst they can probably take it easy and still qualify they could take a pounding physically from the Pumas, if it is in their interest to do so, who played exceptionally well in the recent Southern Hemisphere Fixtures. They should both qualify at the expense of Tonga, Georgia and Namibia in what is a fairly lack lustre group. This highlights the need for seedings in the group stages. Pool D sets a similar challenge to Pool A with France, Ireland and Italy all lining up against each other and the minor places being played for by Canada and Romania. Italy are capable and have beaten both France and Ireland in recent times and if they can stay fit they will cause them problems. Canada have struggled to put away Georgia and others and I cant see them creating an upset so it seems to boil down to what happens between Ireland and France. Sadly this is the last game of the group so it could prove to be tactical. However if one of them has lost a game then it could also be a cracker. For me France are getting better and better and have been overlooked in this competition. They have nothing to lose and no fear of expectation which is exactly when they are at their most dangerous.

In summary it’s not easy to look past the favourites in the groups but they will all have to play well each game to be guaranteed to win. I expect the group qualifiers to be, in the following order. If I am right then the qualifiers look like this

It’s possible that we could then see England vs France in a Semi Final and that is something that would be a good reward for topping your group for England. Second in Pool A makes life a whole lot tougher.

So our selected bets for the World Cup are

And if that all seems a little biased towards the Northern Hemisphere and particularly mainland Britain – then so be it – this is where the competition is being played. Embrace it and lets cheer them on in very loud voices.