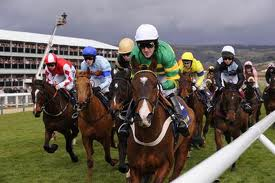 What a fabulous 2 days we have been treated to and whilst it gets more difficult again today we have to approach this days punting with exactly the same discipline as the previous two and hope we can keep adding to our coffers. So, here goes.

1:30
JLT NOVICES´ CHASE (GRADE 1) (REGISTERED AS THE GOLDEN MILLER) (CLASS 1) (5yo+) Winner £89,275 8 runners 2m3f198y Good
Only run for the last 6 years this has become, very quickly, a festival favourite. The figures we have accumulated suggest we need an adjusted RPR of 161, be rated within 8lbs of the top horse, won over the distance and have run previously at the Festival in some capacity. Our short list looks like this, Politologue for Paul Nichols. He will have his fans, with many believing he is a champion in the making. Top Notch for Nicky Henderson and Smiling after a great 1st day

Daryl Jacob and Disko for Noel Mead with Bryan Cooper on board. We are ruling out Yorkhill simply because we haven’t been impressed with his fencing and his price is very short. There is no doubting he is an outstanding hurdler and they may have missed a trick sending him chasing. Time will tell.
We are ruling out Politologue on the grounds of experience and jumping leaving us with Disko and Top Notch who we can’t choose between, so let’s back both each way if this stays at 8 runners
2 units e/w Top Notch
2 units e/w Disko

If the Coral Cup was tough this also features amongst the Rubiks Cube of racing. However let’s look for horses with 11s 4lb or less, officially rated 132-142 and won a class 2 or higher with definitely winning form at somewhere near this trip. So who does that suggest? Well, ignoring the gambles that this race throws up every year we will stick with two at the bottom of the handicap at huge prices. Nick Gifford’s Theos Charm, who may not be quite good enough but will stay and will enjoy this drying ground, the lack of which is something we think means we haven’t seen the best of him yet and Suzy Smith’s Clondaw Cian, who has won a very good race at Cheltenham and again looks the type to be better for this quicker ground. We may not collect as they may lack a bit of class but they should give us a run for our money at 40/1 each.
1 unit e/w Clondaw Cian
1 unit e/w Theos Charm

2:50
RYANAIR CHASE (GRADE 1) (REGISTERED AS THE FESTIVAL TROPHY) (CLASS 1) (5yo+) Winner £170,850 8 runners 2m4f166y Good
We definitely need a previous course winner here, with no more than four runs since October, and having had at least 7 runs over fences with an adjusted RPR of at least 165. The good news is that doesn’t leave many as there are just the 8 runners and they are all horses you would love to own. Our three to decide upon are Empire of Dirt for Gordon Elliott, Un De Sceaux for Willie Mullins and Uxizandre for Alan King. It’s a tough call. We are big fans of Un de Sceaux and he looks better this year than ever so we are going to take on the Elliott hot pot and see if Ruby can get the fractions right from the front.
2 units e/w Un De Sceaux

Can Willie Mullins right the ship in this race?

3:30
SUN BETS STAYERS´ HURDLE (GRADE 1) (CLASS 1) (4yo+) Winner £170,850 16 runners 2m7f213y Good
This year’s race has one of the biggest fields and punters will really be hoping Youknowwhatimeanharry delivers at the forecast odds. He is a working man’s price and fits most of the criteria; which is Aged 6-9, No more than 4 runs since August and an adjusted RPR of at least 165. He has been a revelation but something doesn’t seem quite right at 6/4. He may well win but he will have to get past the group one winning Jezki for whom we think this trip will be ideal, the former Cheltenham bumper runner up, Shaneshill and the perennial group horse, Nichols Canyon. The Fry horse could be in a different league but he is too short a price for us and we really fancy the chances of Jessie Harringtons, Jezki – and so does she. This is the best race on the card today. So let’s enjoy it.
3 units e/w Jezki

Jessie Harrington is really keen on her horses chances

4:10
BROWN ADVISORY & MERRIEBELLE STABLE PLATE HANDICAP CHASE (GRADE 3) (CLASS 1) (5yo+) Winner £59,798 24 runners 2m4f166y Good
This handicap Chase is a cracker. Traditionally this has been a favourites graveyard so we will look outside the obvious. We want something rated between 135-142 and carrying no more than 10st 11lbs. and a horse who has won between 2m3f and 2m5f. It doesn’t leave many. They are UnAce for Is this a David Pipe coup?

This is the first running of this race. It’s the Girls Triumph Hurdle. It would be a shock to all if Willie Mullins didn’t win but the gods haven’t been kind so far this festival. They may smile on him here. Airlie Beach is unbeaten and seems to have a wonderful way about her. Lets Dance was a lot of people’s idea of a banker at this festival and Asthuria was impressive when standing up and obviously has ability. The British challenger Tahira is no forlorn hope though.
Airlie Beach hasn’t tasted defeat and we would kick ourselves if she goes in against the short priced stable favourite.
2 units e/w Airlie Beach
5:30
FULKE WALWYN KIM MUIR CHALLENGE CUP AMATEUR RIDERS´ HANDICAP CHASE (CLASS 2) (5yo+ 0-145) Winner £40,233 24 runners 3m2f Good
Our horses for consideration are cut severely when we look for a horse rated between 134-142, aged 7-9 and rated within 7lbs of the top weight. Our short list is one of just 5 horses. Being an amateur riders race jockeyship could be key and we will take that in to consideration.
Pendra who despite having been off for almost a year is from a shrew yard and Charlie Longsdon can ready one first time up. Mall Dini is on the radar, for Patrick Kelly who puts up the brilliant Katie Walsh and the two David Pipe horses, La Vaticane and Doctor Harper are in the frame as well. A cracking day ! for Gordon Elliott

Gordon Elliot is on fire at this festival

Good luck with your punting and remember, whatever the result its all about getting in a decent shout. They go faster the louder you yell, so get involved and enjoy the fun.