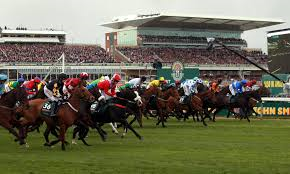 The start of another three wonderful days of Jumping in the lead up to the greatest horse race in the world. It’s a fabulous festival on Merseyside and we think we can find a few winners. So here goes.

On paper this is Top Notch’s race to lose. His second at Cheltenham was outstanding as he pushed Yorkhill all the way and but for his only jumping error at the last, when it counted most, he could have won. His opposition looks to have too much to do with the exception of one. Frodon and Max Ward are good horses but they would be unlikely winners. However the 6l defeat by Altior of Cloudy Dream gives him a real chance and his sound jumping at pace might just tip the balance. Top Notch is very short so let”s go with the Malcolm Jefferson trained seven year old whose light campaign this year will serve him well.

Another short priced favourite in Defi Du Seuil and I don’t think we can get this one beaten. Phillip Hobbs’ horse hasn’t tasted defeat over timber and its doubtful he will here. Best bet I can recommend is to back Divin Bere to win without the favourite or a forecast. He looks too good.

This race, outside of the Grand National, is my favourite race at Aintree. Quality horses over an entirely different test. It hurts me to say I am abandoning Cue Card but he just didn’t look the same horse at Cheltenham and whilst that course doesnt favour him I dont think he will be quick enough. Silviniaco Conti could surpise, he is an atheltic, natural jumper who loves this track and ground but again he isn’t getting any younger. He has however had 68 days off and does run well fresh so that may be a bonus. Empire of Dirt steps up in trip and I think he could be the won but he might have to get past the enigmatic Bristol De Mai who if on a going day is capable.

The champion hurdler turns out here over 4 furlongs further, which shouldn’t worry him but he has never run over this far. He certainly wasn’t stopping at Cheltenham but he needs to be at his best because My Tent or Yours loves this trip as does the New One and Identity Thief, back hurdling might just get a taste for it. At 4/11 I am layer of the favourite and I am going to back My Tent or Yours, each way.

2 units e/w My Tent or Yours

Never the easiest of races to find a winner as moderate horses run over the National course but always an exciting one. I thought Pachu Du Polder jumped brilliantly to win at Cheltenham and he is normally a very safe converyance who could do the same again. On the Fringe ran on well and will be a big danger and in a race where we need to back two of the 29 runners my other two for consideration are Rebel Rebellion who looks well capable of a big run and Black Thunder who pulled up at Cheltenham but if on song could take a hand

I am tempted by Theinval here but I cant help thinking he has a lot of weight for what he has done, compliments of a good performance in a Grade 3 at Cheltneham where he was 3rd. He needs to do better than that again to win this off these weights and he might. Double W’s was a lot peoples idea of a real stand out horse for this season after some early strong performances and this race, in a lot calmer waters, than his recent graded run, might be his if he can equal his early season 2nd at Doncaster. The other who seems to be running off the right mark is Do it for the Village who is on the improve, in form and from a stable sending out winners

1 units e/w Do it for the Village

I like these mares races, they just seem to stack up better on form lines. I have circled 4 horses to come up with two to back. Petticoat Tails whose 2nd to Cap Soleil in a listed bumper at Sandown was impressive. Irish Roe, who dead heated with My Khalesi at Cheltenham, Polly’s Pursuit for Nicky Henderson who has won this twice in the last 10 years and Shearling for Brian Ellison and champion jockey Richard Johnson who was a good winner last time out and for whom his trainer will have a good yardstick as to her abilities against his proven staying flat horses. That and the booking of Johnson take the eye.