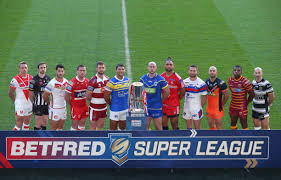 It was a cracking weekend of Rugby last weekend with the highlights for me being the gutsy victories of both the London Broncos and the Salford Red Devils. Maybe because we tipped those wins against the odds but I thought they were really intense games. We kick off with the Super 8’s this weekend and tonight’s game is one that has the bookies in a turmoil, as do one or two other fixtures coming up. Lets see if we can make a few more bucks. If this game were to be played 3 weeks ago St Helens would be 1/3 but they go to Belle Vue tonight as the slight favourites at 8/11 against a Wakefield team that welcomes back playmaker and talisman, Scott Grix, who hasnt played since May. Saints are without Thompson, who has a 1 match ban but other than that they go in to the game almost at full strength. On the surface Trinity appear to have little to play for as their points difference looks far too great to get in to the top four and after two straight losses in the league Saints may well be vulnerable. Rugby players dont seem to have a half pace switch so the Saints can not expect an easy run. Some could assume that Saints, with a 10 point lead, dont need this win but they will be desperate to right the ship.  I expect a touigh game but I think Justion Holbrook will have his men back to peak mental concentration and we could see a real league title indication performance from the team that a month ago everyone said would walk the league. For that reason they must be backed to win tonight. Tigers vs Wolves at the Jungle

This one has got me confused. If you asked me who was higher in the league I would have said Warrington, who when they are on song look unbeatable and every game I have watched of Castleford this year they have been awful, yet the Tigers are 2 points ahead of the Wolves and have only lost 7 of their 23 games. Tonight the Tigers are favourites based around home ground advantage but to me they are missing 3 important players. Jess Sene-Lafao, QLT and Adam Milner. The Wolves have Ratchford, Mudoch-Masilla and Cooper back, although Livet and Charnley are absent. My concern is that last week Wigan were over 20 points ahead in a heartbeat and whilst the Tigers did work there way back in to the game they were chasing shadows. If they play like that tonight they will get beaten easily. I think Warrington are an exceptioanlly good team and they will win in a hostile environment.

The Giants  against Hull is interesitng but only because The Giants believe if they just keep winning they can make the top 4. They may be right and they have the belief. They will prove too strong but at 2/5 I am not that interested. Salford are the 2/5 favourites against Widnes but I fear a backlash from the 17 consecutive losses that Francis Cummins (still in a job!!) team, the Vikings, have suffered and Salford are just the kind of team not to turn up at the atmosphereless ground that they call home.

Toulous are massive favourites at home against Halifax and they will win so if you want to put them in an acca at 2/7 with Hills then that could be one of your bankers.

Toronto are not past the post against Hull KR and are 8/11 but that probably reflects the home ground advantage they enjoy in front of a very partisan crowd.

The final game is a belter on Sunday. Can the Broncos upset the apple cart again against Super league opposition and go 9 games unbeaten, this time they take on the might of the Rhinos. I think not. The Rhinos will get it done – ugly, but they will get it done and you can safely back them at 8/15 with Betfair