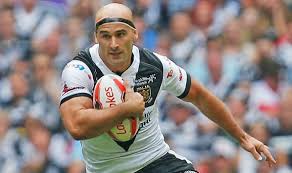 After a week off in which Catalan justified their negative approach to the Super 8’s by winning the Challenge Cup we now get back to business with some interesting games in both the Super 8’s and the Qualifiers. The trick here is to find the games that really matter and in the Super 8’s some aren’t that important but in the Qualifiers every game and point counts at this stage, so let’s start there. The best half back line in Rugby League- but not now

Both teamns will be desperate for the 2 points and having lost one of their games already it is a vital fixture for the Robins. Leeds cant afford a slip up either or they slide to 3-2 and join so many others in what will quickly become a dog fight for survival. The problem for the Robins is they just don’t have the playmakers and opportunities are too hard to create. For that reason Leeds will win at home. Tough game for the Vikings, away, who havent won a game in the qualifiers. Somehow the bookies have Widnes as slight favourites and whilst they are stronger on paper they have little or no confidence, they lack cohesion and you can see the fear rising. Toulouse play with flair and courage and at home are really tough. They are bouyed by the success of Catalan and French Rugby league looks like getting stronger with another win this weekend against the odds

The Wolfpack are at home and take on the Broncos with both teams having a win and a loss. It was the home team who let a golden chance slip last time against Hull KR and the fact that they should have claimed a Super League scalp and be 2-0 leads me to suspect they will be too strong for the Broncos, who have had a magical run. But at 100/30 on, best priced with Betfair, they arent a lot of value.

In the Sunday game Halifax will succumb to Salford making them 3 from 3 and in fact the 1/4 on offer with bet 365 is much better value than the 1/3 about the Wolfpack.

The best half back line in Rugby League

This is Hulls best chance of a victory. So many teams fall by the wayside after a Challkenge Cup Final but given Hull are 0-6 latest and Warrington are fighting for home ground advantage in the Semi’s, I think we will see a focused Wolves who will be too strong at home. Hull are without Minichello, Green and most importnaly Mark Sneyd their ace playmaker and kicker whereas the Wolves seem to have got through last weekend unscathed. The handicap line is 10 poimnts and I dont fancy that so we will just back the Wolves to win

9 points win Warrington at 1/3 with Skybet The Saints can secure their league leaders title tonight and it would be a fitting celebration at home for a side that has all year played the best, most error free Rugby. Wigan are no pushover and with Sean O’Loughlin back and Oliver Gildaart they will be even tougher to master. I expect the Saints to crown their season at home and secure top place for the finals but it wont be easy and the 10 point handicap with Sky seems wrong.