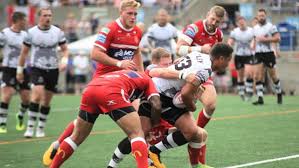 Two great games to get your teeth in to and make the most of before this fabulous season ends. The first of our games kicks off at 3.15 and its a humdinger between the Warrington Wolves and St Helens. With an away semi final already assured the Wolves play their last home game of the season and it may be they have to play Saints twice in a row, so a win is really important for them and their legion of fans. Justin Holbrooks Saints team know all about momentum after their disasters following a loss to Catalan in the Challenge Cup Final. Poor form for the first time in the season was evident for the next 3 games and he wont want a repeat of that.

Both teams are almost at full strength for this game and neither has rested star players, which shows that both Aussie managers are desperate to get the winning feeling going in to the finals. It will be a tough fixture and I expect Warrington to have just that bit more desire in what will be a tense fixture for at least 60 of the 80 minutes. If either team breaks away late then expect a landslide of points at the death. At 5.30 the most crucial game of the Qualifiers takes place between Widnes Vikings and the Toronto Wolfpack. Whoever loses this game is going to struggle to make the million pound game and for that reason this will be tense. Widnes have been in shocking form but are showing signs that they can come through this after stopping the rot with a win after 20 consecutive losses, they will need more than just signs to get the win they want and avoid being the first Super L

eague team ever to be automatically relegated. Against them and at home is an exciting Wolfpack that needs to believe and play without fear to win. Brian Noble knows a thing or two about cup football and Paul Rowley, head coach, has his team playing aggressive rugby. The loss of Paul Bussey for 8 games for biting, is a blow but they have some quality fowards with Ashton Simms and the return of winger Matty Russell is a boost for a squad that looks healthy after a 30 match season

to date. To me this game is a coin toss so when I see 11/8 about the Wolfpack I have to take that on board.

Note : All prices advised are correct at  the date, time, stamped of publishing.